Bees don't see red light, well that's how the theory generally goes. If bees are close to red light sources, they still may end up in the lights, however they have to be fairly close, meaning less than 1 meter in our experience.

We have conducted quite some testing with different lights in order to come up with the right gear to be mounted on cars, trucks and trailers. First we started off with hand held red led light torches as shown on the initial pictures and they work great. However for shifting bigger loads of bees, a little hand torch is not exactly the ideal tool.

During our search for products we found 230V / 50W red LED lights on ebay, some of which last longer, and others just last a few weeks. We are guessing it really depends on the batch number of those lights on how long they may last. If used indoors for sheds and other loading areas, probably put an easy fix in place to replace them easily if the eBay lights fail.

The 3rd set of lights had been ordered from ultra-vision.com.au and come in a 25W and 45W strength, of which we had mounted 25W lights on the sides and two 45W lights facing the rear, making sure we have sufficient light on our trailer surface.
Basically we are using the Prado as the light beacon for loading and offloading the trailer as well as other vehicles in its reach.

The red lights have heavily assisted our operation and during shifting bee hives at night, helping to avoid us getting massive amounts of stings by picking up things with a pile of bees on them or underneath without seeing them. Also strapping hives seems to be a lot less painful now as we can see every moving bee without them seeing us.

The other big noticeable impact the red lights also have is to avoid damage and injuries, such as tripping over stuff in the dark, or hitting things with cars, trucks, and loaders, while not needing to be worried that bees start flying. They have been working great for us within our operation.

Initial torch we had used, found on ebay: 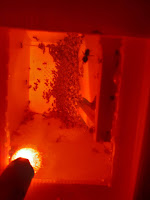 Those hand torches are handy but for very limited use.
Usually found as "hunting red lights" online.
Product info:

Torch
eBay 50W lights:
Range around 11-16$ AUD, some last longer, others just last a few days. We would recommend using them with a mounted power plug, and try to avoid installing them into fixed installations, as they fail to fast and often. 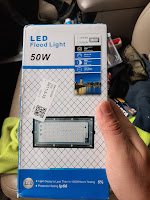 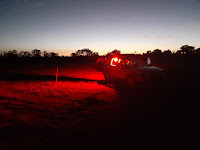 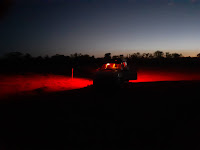 We just recently picked up some red ATOM LED flood lights from ultra-vision.com.au, we had added 25W lights to the sides, and have placed 2x 50W lights to the rear of the car, illuminating the trailer and or second trailing vehicle at the back. We will update the the blog shortly on how those new lights have performed. 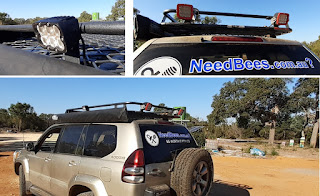 However you will have to ask for the RED LED light version of those otherwise you will receive white lights.

Lets look at the test environment during sunlight
This should serve as a reference point in regards to distance to hives and trees as the cameras generally have difficulties under red light.

Cameras generally don't necessarily work very well at night or with red light hence the pictures are fairly blurred, but I have created a below Youtube video as it shows a better picture of how well one can see.

Working with RED LED lights has made quite a difference for us! Let us know how they do for your operation!

Some considerations before you are getting bees into your backyard

Where can I buy bees?   Well, right here:    Buying bees in Perth Western Australia But, before you do that, lets have a look at a few cons... 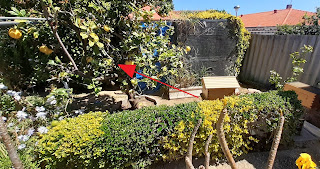